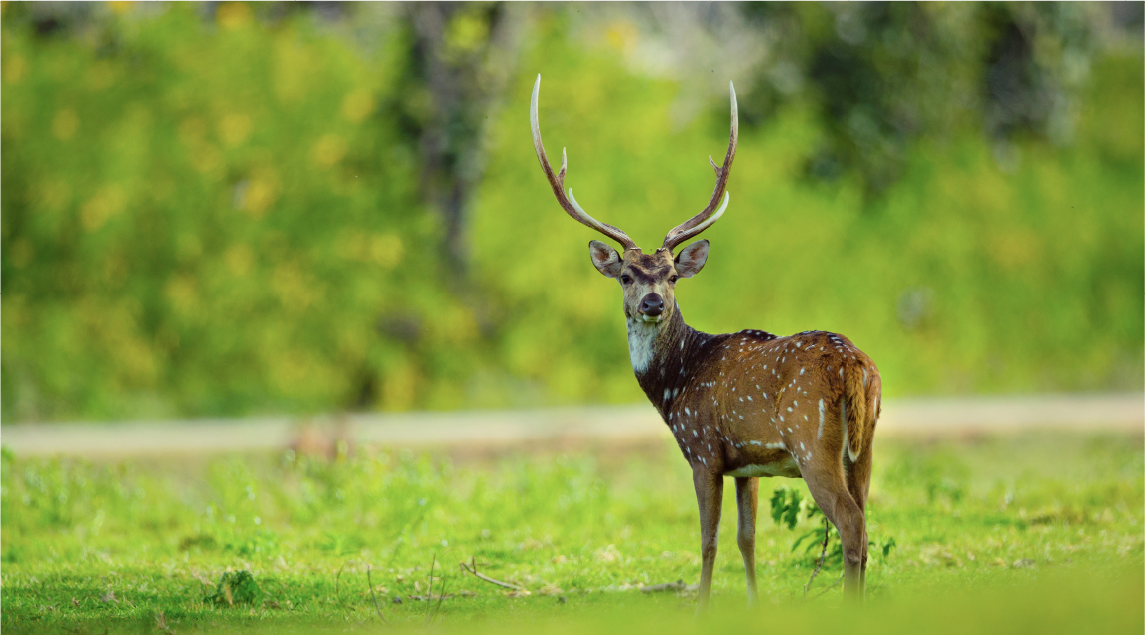 The underlying rocks belong mainly to the metamorphic formations of which Gneiss, Quartzite, Mica, Hornblende and Schists are found generally all over. The Igneous rocks, Granite and Charnockite are found intruding through the metamorphic rocks appear as out crops at higher levels and in the beds of water course. Quartz is a major component of the rock formations in the south east extreme of the Reserve in Kaniyanapura Block-II and III, Moyar Area and the fissile character of the Granite near Yelchatti is largely due to the banding of Quartz veins. A variety of Pinkish Grey Granite is seen in the beds of Heballa, Honnurhatti and Arekadu halla (Dr. Kadambi).

Two Principal types of Soil are –

The soils are shallow on the hill tops and deep in valleys. The substratum of clayey soils is generally a variety of white, soft, easily disintegrating rock in which feldspar predominates. The clayey soils are confined to low lying localities in patches. The substratum of loamy soils consists generally of metamorphic formations which are highly ferruginous. The reddish loam soils are the product of the process of weathering of these underlying ferruginous rocks. The best forest growth is found on deep well drained loamy soils. There are patches of shale mixed with powdered quartz containing some minerals and salts which form the Natural Salt Licks for the Wild Animals. The one at Upneerhalla and some on Chammanalla road are good examples of this type.

Hydrology and Water Sources
The Reserve is located in Wayanad plateau, characterized by the presence of several Swamps and Vayals of varying size. These Vayals and Swamps serve as wallowing grounds for the herbivores like Sambar and Wild Boar and Tiger. The central part of the Reserve is slightly elevated with intermittent hills of moderate height, interspersed with several seasonal streams and a few perennial water sources, the prominent ones being the Moyar River originating from the Nilgiri Mountain Range near Pykara, meandering through the Reserve over a length of more than 20 Km. Moyar River is the major water source for the wildlife and people living in and around the Reserve. On the western part of the Reserve bordering Wayanad of Kerala, a river by name Noolpuza enters Karnataka State, known as Nugu hole. This traverses through the Reserve for more than 30 Km, ends up in the backwaters of Nugu dam. There are several other seasonal streams and rivulets viz. Mavinahalla, Shikkatihalla, Bidarahalla, Hebballa, Kekkanahalla, Vaddattihole, Waranchihole and Mukkattihole. However, water is available in the form of puddles to the wildlife throughout the year.

Climate
Three seasons are markedly noticed in the Reserve, the dry, the wet and the cold. The cold season starts in November and lasts up to mid February; later on the hot season commences and lasts up to middle of June. The coldest months are December and January and the hottest are March and April. The wet season starts in the middle of June with heavy pre-monsoon showers in April and May. The wet season lasts up to September. The North-East Monsoon starts from the mid of October lasting up to the mid November. The climate is generally hot and dry in summer; with occasional pre-monsoon showers. The climate, on the whole, is generally healthy except in the South-Western portions of Beerambadi, Ainurmarigudi and Begur area.

Vegetation Types
Principal Forest Types- The forests of the Tiger Reserve are varied and rich. To the eastern most portions lie the scrub forests of Moyar. While the vegetation in the central portion of the Tiger Reserve viz., Kaniyanapura, Bandipur part of Beerambadi is dry deciduous, the vegetation in the western part of the reserve viz., Ainurmarigudi, Begur and Beerambadi is moist deciduous. The vegetation, therefore, changes from scrub type to moist deciduous type from east to west. These forests are classified as under: 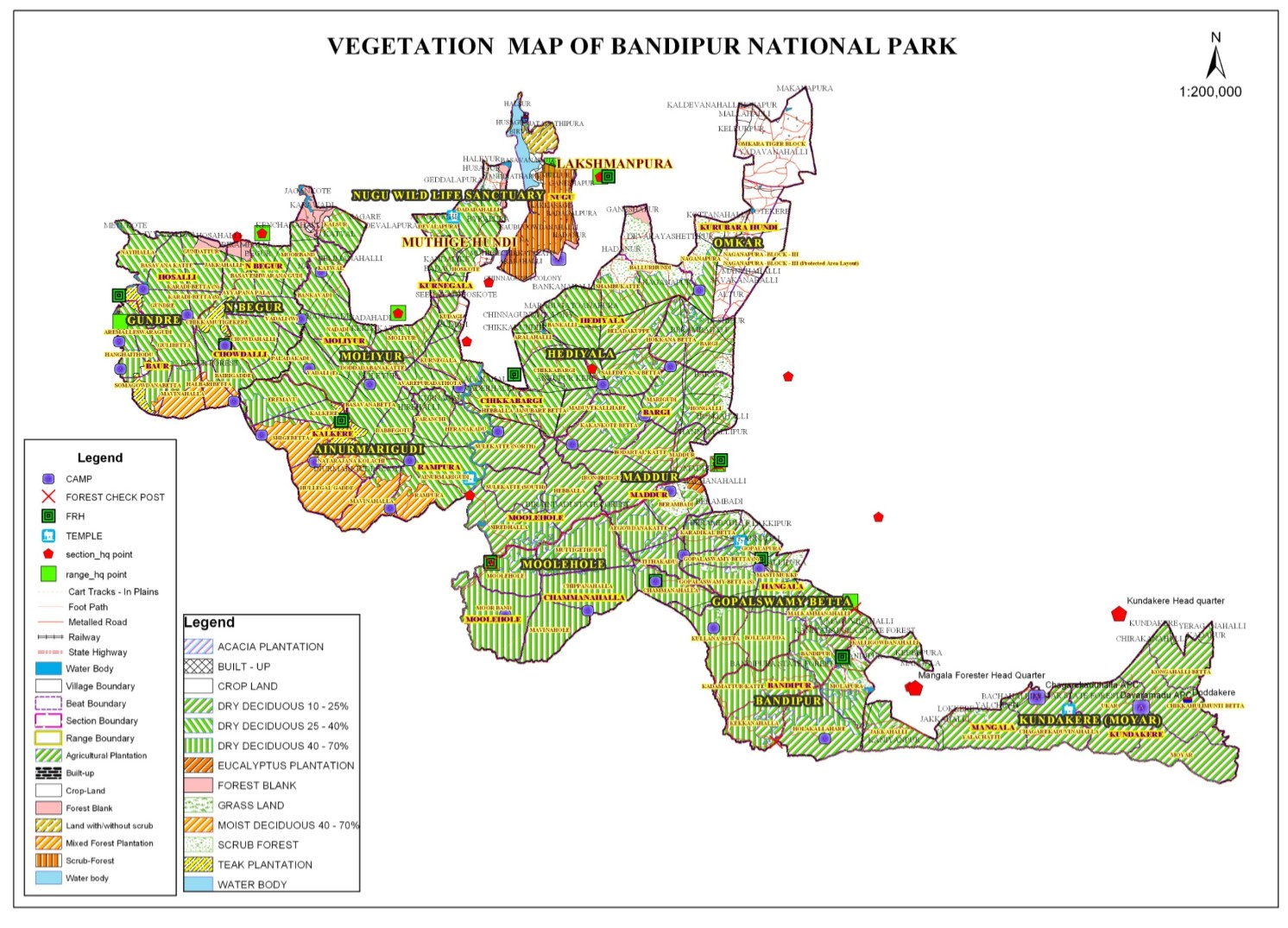 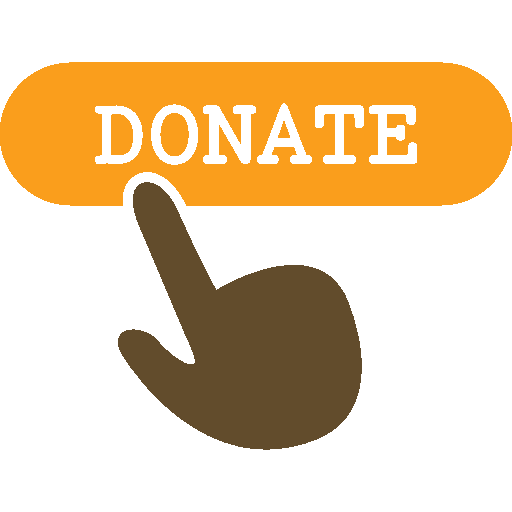